What Is Razor Tail On Skateboard And How to Stop

No matter how durable skateboards are, they still have a definite lifespan. At one point, the tail of your skateboard starts chipping off and becomes thinner. That is called a razor tail on a skateboard.

What Is Razor Tail On Skateboard?

The skateboard deck carries the weight and the pressure of the rider. As a result, it goes through the most damage too. The tail suffers the most damage while it is dragged to stop, doing kickflips, landing flip tricks or manualling. Due to these moves, the tail of the skateboard is over rubbed on the ground and so the edge starts becoming thinner and sharper each time.. Eventually, the skateboard cracks as a whole because of it. How Do You Know If the Skateboard Razor Tail Or Not?

A skateboard has a nose and a tail. The tail is the end which is round in shape and scoops upwards a little. While skating, the pops or manuals have to be performed balancing right on this tail. Likewise, the tail is dragged over the ground to make the skateboard come to a stop.

You can see that the round smooth tail has begun to chip away, creating a thin sharp edge on the underside of the skateboard. It becomes razor sharp and light hence being named as a razor tail.

You will notice your pops aren’t that smooth and there are slight cracks from this thinning edge. If you look at the tail from above, it will be flat and squared off instead of being round as it was originally. That is how you know that the skateboard has developed a razor tail.

The more you perform flip tricks, ollies and slides, the faster it is likely to create a razor tail. If you practice skating on rough ground, it will make the skateboard develop a razor tail sooner too. How Does Razor Tail Affect Your Pop?

Razor tail affects your pops negatively. If your skateboard is losing pop gradually, it might be specifically because of the razor tail. The damaged, thin edge will prevent you from jumping high enough. It will also make the landings harder and uneven.

These factors make performing pop, flip tricks a great deal complicated. It might take a while for you to notice the reduced pop as the razor tail affects it slowly over time.

However, if you have been skating for a long time then you might detect the change right away.

How Much Razor Tail Is Too Much?

There is no fixed time limit that will indicate that the razor tail of your skateboard is too much by that time. The damage from the razor tail depends on the riding styles and frequencies. Still, there are a few signs that might let you know exactly how much razor tail is too much.

If you are facing the above issues with your skateboard, the razor tail is undoubtedly too much to fix. In that case, you should invest in a new skateboard for a better skating experience overall.

How To Prevent Razor Tail On Your Skateboard?

Fixing a skateboard after developing a serious case of razor tail is often not completely possible. You can never undo the damage it has already caused the skateboard.

Therefore, it is always better to prevent it from happening too fast. Here are some of the methods that will help you know how to prevent razor tail:

Use a Tail Guard

It acts as a buffer between the ground and the tail of the skateboard so that the rubber can absorb all of the pressure and damage to it. Therefore, a tail guard skateboard remains damage free and smooth.

Tail guards are very durable, thin and lightweight so you won’t even feel it’s there during performing your tricks. They keep the skateboard well balanced and well controlled. Most of the local stores have tail guards in their stock which costs about $15.

It comes with necessary mounting hardwares and is really easy to install. Thus, razor tail fish guard prolongs the lifespan of your skateboard to a great extent. Every skater should install razor tail guards on the skateboard tail as soon as they get a new one. Sanding the deck is a good way to remove the razor tail and increase the longevity of the skateboard. You can use 80 to 90 grit level rough sandpaper to flatten the edge of the deck. Start sanding heavily around the edge the razr tail has formed and you will slowly start to see the deck getting its original shape back.

The sharp edge will be gone and will be replaced with a rounder and smoother edge. Sanding will remove thin pieces of wood on the deck called veneers and the grip tape of the entire deck.

It is true that sanding makes the tail a bit thinner but it only removes 1/8th of the original tail. You can repeat this process every time a new razor tail forms for a few times. So, it can be a good method to get rid of razor tails. Carbon fiber is a strong, durable material which is also lightweight. A carbon fiber layer can add some extra protection to something easily.

Applying a carbon fiber layer over the skateboard will only be beneficial in the long run as it will protect the board from getting scratches or damages.

For regular and professional skaters, applying carbon fiber all over the deck is a good choice. Doing kickflips, fliptricks, manuals, slides will require that extra layer of protection to the deck.

Otherwise, you can also put a carbon fiber layer only on the tail of the skateboard to avoid razor tail fish. Tail scrapping is one of the most common moves skateboarders use in order to come to a stop. It’s when the tail is dragged across the ground and the friction eventually allows you to stop. This move incredibly damages the tail and chips away at your deck faster than you can imagine. The pressure and the friction burns down the layers of the deck. To avoid doing this, try using your foot to make the board stop. You’ll need to allow the friction of your shoes to the ground instead of the tail to avoid razor tails. Good quality shoes with friction tolerance will let this method be possible without wearing off too often.

When you’re performing tricks and manuals, it might not always be possible to stop the skateboard with your foot. It is always a good idea to adapt new stopping methods depending on what the situation calls for. You can use Heel brake when you’re approaching something too fast. Foot brakes are for when there is a sudden turn or need to stop on level surface. To stop when coming down from a high surface, jump off and powersliding can be useful. Using these different methods, it is possible to avoid scraping the tail on the ground and therefore, minimize razor tails.

Apply Grip Tape To The Deck

Grip tapes are generally used on the top surface of the skateboard. It allows the shoes to stay on the board more firmly and protects the top from getting scratched from the shoes. Therefore, it can also protect the tail from getting as many scratches and damages. You can cut the grip tape and put it on the tail of the skateboard to protect it a bit more. The grip tape can be applied to the bottom of the deck as well.

Most frequent questions and answers

Do you ride with the tail on a skateboard?

Yes, you can ride with the tail on a skateboard. If the razor tail isn’t affecting your tricks and chipping away constantly while riding, then it is perfectly alright to ride it until you get a chance to replace it.

Can you ollie with a razor tail?

How to fix a delaminated Skateboard?

Needless to say, razor tails can be pretty annoying but as long as you take these necessary measures, it is also possible to prevent it to a great extent. The tail will be scrapped throughout the time no matter what, but at least the prevention measures will slow it down and let you ride the skateboard comfortably for a long while. 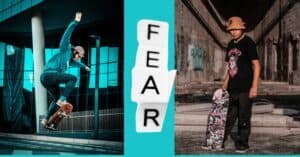 How to overcome fear in skateboarding? Burst your fear Which Way do Skateboard Bearings Face? Where to Put Stickers On Skateboard?

Skate Insider is dedicated to presenting every aspect of products honestly, objectively, and impartially. Our experts test thousands of items each year, using methodical testing plans to differentiate key features of competing products. After every test run, we acquire all the products we buy and perform additional testing ourselves. We do not cherry-pick units from manufacturers and click on sponsored links. We never advertise, nor do we allow any advertising on skateinsider.com.

Skate Insider is a participant in the Amazon Services LLC Associates Program, an affiliate advertising program designed to provide a means for sites to earn advertising fees by advertising and linking to Amazon.com